Lena pulled at the loose skin around her eyes and dabbed more concealer at the corners, the bruises from the last client almost hidden beneath the thick cream.  These men didn't seem to notice or care about the cigarette burns on her legs or whip marks on her back.

Her thin fingers ran down her neck, tracing the covered bruises from her last client's fingers.  She gasped when his face flashed before her.  He giggled as he squeezed the life from her body.  His rotten teeth and putrid breath stabbed her nostrils.  Thick spittle dripped from the corners of his mouth and fell on her face as she slipped into darkness......

She had survived, but it left her dead inside.  The nightmare continued.  There were clients waiting. 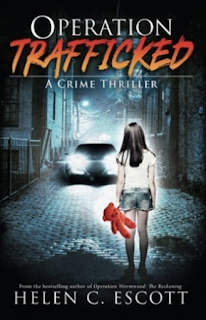 Sgt. Nicholas Myra and Cpl. Gail McNaughton have teamed up in Helen C. Escott's fourth crime thriller, Operation Trafficked.  After the murder of a young sixteen year old girl in a downtown hotel,  a special joint forces operation headed up by Myra and McNaughton seeks to investigate a sophisticated ring of international criminals specializing in human trafficking and the sale of women and children for sex.  As they attempt to piece together the events that led to the gruesome and untimely death of the young polish girl, they discover that what was once considered the oldest profession in the world is very much alive and well in the city of St. John's, Newfoundland and its surrounding areas. Suddenly a new realization emerges; these girls aren't just sex workers; they are sex slaves, often held against their will for the pleasure of powerful men who occupy the upper echelons of society.

Dedicated to the thousands of women and children who are trafficked everyday,  Helen C. Escott crafts a story that is both shocking and gut wrenching.  Told in the third person point of view,  the author does a superb job at providing insight into the backstory of each woman, drawing readers into the plight of each of the female characters and elevating them to real people deserving of our empathy and support.  Whether it's the young mother, herself abused as a child, and now sending naked photos of her 7 year old daughter to her unknown boyfriend in a foreign country or a young Russian teen who has just discovered she has become pregnant by one of her johns,  readers will be sickened but also saddened that such a market exists in our very own neighbourhoods. Though the subject matter is heavy, there is relief!  Throughout the narrative, Escott also weaves the continuing story of Sgt. Nicholas Myra, first introduced to readers in her first crime thriller Operation Wormwood and that of Cpl. Gail McNaughton, whose investigative skills are revealed in Operation Vanished.  The duo and their team of cracker jack investigators are undaunted in their efforts to seek justice and in turn are able to provide closure to the families whose loved ones have gone missing.  Readers will have a hard time putting this book down.

Operation Trafficked by Helen C. Escott shines a very bright light on the heinous crimes that exist when a marginalized group are exploited for pleasure and gain.  Kudos to this award winning author for giving a voice to the voiceless! Operation Trafficked is a Flanker Press Publication.

Stephanie Collins
Welcome to my blog! For as long as I can remember I have always loved to escape; escape to new lands and escape into the world of a good book. Like our beautiful province, the authors of Newfoundland and Labrador will be sure to impress you. If you like what you read, please leave a comment and support our writers by picking up your own personal copy so that you too can experience the best that NL has to offer.